Open letter submitted on Sept. 22, 2016 to DearTomorrow building an archive of messages in order to preserve this important moment for future generations. These messages will be released in the years 2030 and 2050.

To my daughter and son,

I am writing this letter to tell you how much I worried about climate change impacting your life and the life of your children and I hope that by the year 2050 you will look back in time and laugh about my fears. Unfortunately, this is anything but clear.

In the late 1980s, I was writing an essay in school discussing consequences of white jet trails on climate. We already knew that emissions of carbon dioxide in the atmosphere would lead to higher temperatures and we knew that human activity may alter ecosystems to the point where life on earth would become endangered. Soviets and Americans were racing to build nuclear weapons, capable to extinguish life on earth. CFC emissions caused a growing hole in the ozone layer which shields us otherwise from ultra-violet radiation. Animals in Patagonia got blind from the intense UV radiation and people worried about skin cancer. Fortunately, the world has banned the use of CFCs and the ozone hole in 2016 is starting to close. But these stories teached us early that human activity was able to put life on earth at risk.

For me it was crystal clear that the enormous emissions of a growing human population burning fossil fuels would at some point alter our atmosphere to an extent where climate change is inevitable. And it was not difficult to imagine that this would cause heavy draughts, storms and floodings as well as rising sea levels as we start seeing today.

I decided at that time in the 1980s to make every possible effort to move society out of the danger zone and into a more sustainable future. I dedicated my whole working life to the development of technologies which may substitute fossil fuels and reduce carbon dioxide emissions. I studied physics, got involved in photovoltaics, started to work at the prestigious Fraunhofer Institute for Solar Energy Systems and developed some of the most efficient solar technologies with my group. Photovoltaic module prices dropped year after year and reached record lows of 3 US cent/kWh in 2016 for projects in the Arab emirates. Still political leaders are discussing nuclear energy, coal, natural gas and oil as viable options, houses are built with gas heating and cars consume 5-10 liters of gasoline on 100 km.

Surrounded by technologies which could fix our problem, we are progressing too slowly. I would like to hit the gas pedal but someone is sitting on the breaks. Surrounded by scientists who shared my fears and visions, I often had a hard time to accept that outside our small community climate change received marginal attention. Climate denial was widespread and political action never reflected the urgency I saw. It has been often depressing to see how little we could do and I decided to follow the general principle of contributing as much as possible and otherwise enjoying life as it was. I try to be optimistic and convince people of a brighter future with renewables.

While driving our VW car or flying an airplane like everybody else, I promote higher taxation of fossil fuels and carbon dioxide emissions. I bought CO2 emission rights and shredded them in my office to remove the allowance. I invested all available money into wind and photovoltaic projects to deploy this energy generation technology more quickly. These investments are today producing electricity for more than 100 households but not enough! I built a zero energy house combining good insulation, geothermal heating and photovolatics and tried to tell everybody how comfortable it was to live in such a house. I drove one of the first e-bikes running 45 km/h to work and impressed many of my colleagues passing by at full speed. I pushed technology development at work for lowering the cost of renewables.

While doing so, I have met many great people sharing my hope for a more sustainable future. Some faults can be reverted, ecosystems recovered and I pray that this will all happen in time for you to live a prosperous and fulfilling life on our precious blue planet.

With all my love, 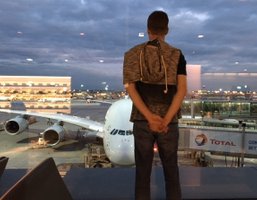