Did you know that US military attacks are responsible for the death of more than 20 Million people since World War II. Did you know that the US in 2016 has dropped 26'171 bombs, or 3 bombs every hour in Syria (12192 bombs), Irak (12095 bombs), Afghanistan (1337 bombs), Jemen (35 bombs), Libyia (496 bombs), Somalia (14 bombs) and Pakistan (3 bombs). Did you know that the US military budget in 2017 will be 824 billion$ or 2.25 billion$/day. Think about the incredible power behind these numbers which can be easily confirmed on the internet. Of course not only the US is involved in these conflicts but also NATO partners including Germany. And this despite the fact that present wars are illegal according to the Charta of the United Nations signed in 1945: "All Members shall refrain in their international relations from the threat or use of force against the territorial integrity or political independence of any state". In this context it has to be noted that the presence of Russian military in Syria is legal as Assad has asked Putin for help. Did you know that Sevastopol (KRIM) is a military base of the Russian federation in the Black sea, connecting to the Mediterranean. Sevastopol is also vital for the supply to the military base in Syria and therefore conflicts in Ukraine and Syria are dependent. Could it be the purposes of war in Syria and Ukraine to remove Assad and the Russian military bases from both countries? Did you know that our German foreign minister Genscher promised to the Russian federation that after the reunification of our country, NATO will not extend to the east. And that today NATO troops are 150 km from St. Petersburg. How does this feel for the Russian president and the people? Did you know that the majority of inhabitants of the KRIM are Russians, living peacefully with other ethnic groups and most of them want to be part of the Russian federation. But NATO is pointing against Russia as the aggressor. Open your eyes and you will see that these conflicts result from military strategy to extend power in the Middle East and against Russia (not saying that these countries are fully peaceful democracies but people in these countries are just like you and I). We are victims of propaganda spread through the media and the media is not helping us to understand. In fact I was completely confused about the war in Syria until I started investigations on my own. I realized that all the puzzle pieces are available if you search for them. Our mind is sensitive to find the truth as we read through different articles with different message. Start questioning how terrorists can be the reason for conflict in the Middle east while Saudi-Arabia is the best friend of the western world. I want to encourage you to try and search on YouTube or TED, listen to talks which last 1 hour or more, talks that explain rathern than claim. Most conflicts are conflicts for resources, especially oil and gas in the Middle East. Note that we humans consume 90 Million barrels or 45 super tankers of oil per day. We are told that these wars are necessary to save us from terrorists, free people from dangerous dictators, bring democracy and freedom. But after 20 Million deaths, millions of refugees and thousands of bombs, this can not be the truth. Therefore, I ask everyone to become more active in supporting peace! Human life is holy and all our nations should respect the UN Charta they have signed. NATO should be an alliance solely for peace and defense. Oil and gas can be replaced by renewable energies. For this we need to redirect part of all military budgets to pay for the transformation of our economies to a sustainable and peaceful one. Please raise your voice, vote for parties that support peace, energy transition, sustainable development, human rights and diversity. 99% of all people on this planet can share this vision. You are the power to make it happen. 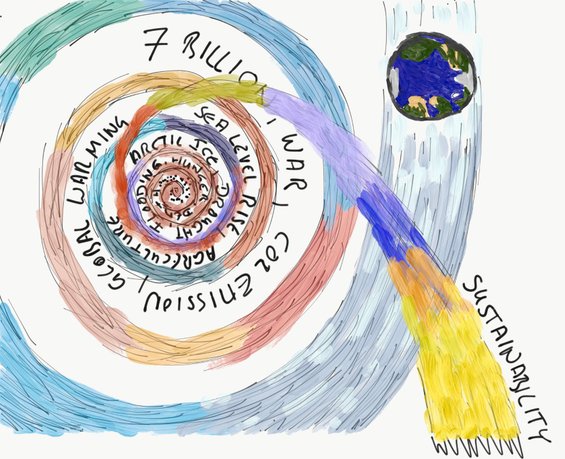