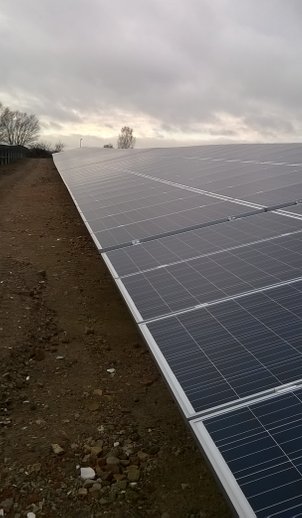 In 2015, I invested into 40.8 kWp out of a larger 3.5 MWp power plant which was build by Baden Invest in the North of Germany in Neverin. This time PV modules of the Chinese company Astroenergy were used but these modules are build in Frankfurt (Oder) in Germany. The inverters are from the German manufacturer SMA. With the massive lowering of the feed-in-tariffs to 9 €cent/kWh for a PV power plant like the one in Neverin, most German manufacturers had to leave the market and it became increasingly difficult to maximize local value creation. Politics in Germany has done a poor job in protecting our solar industry and making sure that local manufacturing is promoted. New PV installations in Germany dropped from 8.3 GWp in 2012 to 1.3 GWp in 2015 and most of the modules are now imported from China.

Still, we succeeded to build another solar power plant which maximized local value for the modules, inverters, construction, maintenance and operation. With 9 €cent/kWh of payment this PV power plant in the rainy North of Germany is still predicted to generate a positive interest rate on the investment of 3-5%. In other words, we can generate PV electricity today below 9 €cent/kWh everywhere in Germany.