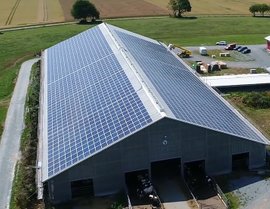 In 2017, my newest investment is a 39.75 kWp photovoltaic system in Zell. First time that I did not succeed to find someone to install German PV modules. Our biggest manufacturer SolarWorld just recently announced insolvency in May 2017. The Chinese have won the fight for the lowest manufacturing cost of PV and German politicians did not safe the thousands of jobs in our country. Now we have to buy PV modules from China which are produced under low environmental standards and under devistating conditions for the workers in the fab.